When businesses struggle to reestablish their email communication after Exchange crashes and EDB corruption, Kernel for OST to PST Converter is there to help them restore individual mailboxes from offline Outlook Data Files.

Since its inception a decade back, it has helped many Exchange organizations in restoring their email communication after Exchange disasters.

The arrival of Kernel

Kernel for OST to PST converter was launched. The tool helped its user to retrieve the OST data in just three easy steps.

After some significant improvements, the conversion time was reduced.

The OST to PST conversion became faster. Also, the tool got a better email preview facility.

The email conversion process got even faster with the performance improvement.

Kernel for OST to PST Converter witnessed its first reincarnation with the introduction of the improved algorithm and more advanced features.

After some bug fixes and performance enhancement, the newly updated OST to PST Converter became faster and more powerful.

The newer version of OST to PST converter allowed users to find particular items within the mailbox and to save them to MSG or EML format.

Kernel for OST to PST converter was launched. The tool helped its user to retrieve the OST data in just three easy steps.

A new user-interface that allowed effortless access to emails, tasks, contacts, and other mailbox items was introduced.

OST to PST converter can recover the OST files from the MS Exchange Server 2016. The tool could also be used on the newly launched Windows 10 OS.

Client Testimonials
My Outlook profile had become corrupted and I had to delete and recreate it. Because Outlook stopped using PST a number of years ago, I couldn’t import my data that I didn’t want to loose, so I searched and found Kernel for OST to PST . This saved me an enormous amount of time and effort.”

Your software was an invaluable tool when I performed a Google Apps email migration for an organization that was still using Outlook, and one of the users was using OST email data archives. The tool was user friendly and intuitive, and it really was a life saver to make sure the email migration went well.”

Kernel for OST to PST software allowed the .pst to be created and therefore could then be imported into the new Outlook email account profile.

The best thing of Kernel for OST to PST is that it is for a lifetime, without any additional renewable charges. Its trial version gives sufficient knowledge of the tool so that users can make an informed decision on purchasing the licensed version.

Kernel for OST to PST converter as an efficient and intelligent email recovery software. The development team has taken a great care of the user perspective and has added smart features into the software. The software is highly reliable and completes conversion in the least possible time.

To View the complete process of OST to PST Conversion :View Video 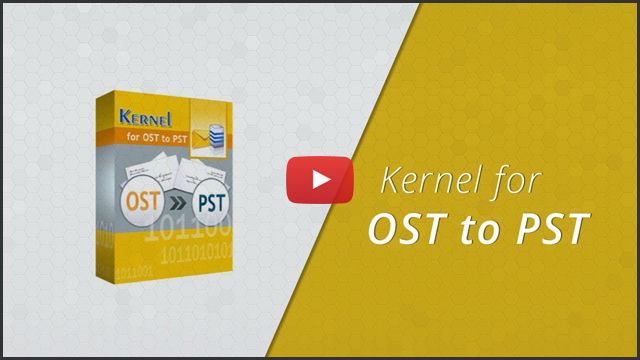