Kernel for Lotus Notes to Outlook

* Download trial version and Save 10 items from each folder.

These days email migration has turned out to be the most common trend as many businesses are changing their respective needs and to deal with various cost-effectiveness and data management matters opting out tasks like switching of emails from one platform to another.

We migrated from Lotus Notes to Outlook this past January. We used the Kernel application to migrate old, archived Notes email to Outlook. Once the emails were in the PST format, we were able to add them to the new online Outlook archive.

A great tools. It helped us convert the Lotus Notes database (.nsf) to Outlook (.pst) in a migration of more than 3,000 users.

Users can perform either manual migration or automated migration (using a CSV file) to export multiple NSF mailboxes at a time. This bulk migration of Notes and Domino Server NSF files helps to save time and effort.

The tool facilitates secure and quick backup of IBM SmartCloud Notes NSF files. It can backup the mailboxes to PST and other destinations.

This tool has the option to save the NSF data in multiple PST files (of any desired size). So the output PST files are easy to manage and less vulnerable to corruption. They can be imported in any version of Outlook or Exchange Server.

With this tool, users can filter mailbox data by a date range. Also, they can skip folder name 'All', skip hidden views and folders, include/exclude folders & select/unselect item types and mark all messages as read/unread before migration.

Once the migration process has started, the file items will get migrated one by one. The migration status of each NSF file can be viewed with the View Migration Logs option available in the tool.

The software offers a preview of mailbox items when offline NSF files are added for conversion. The preview shows the exact item content along with its metadata like From, To, Cc, Bcc, Subject, etc. (It is to be noted that software has no preview facility for Domino Server NSF files.)

The software migrates every healthy NSF mailbox item like emails, contacts, tasks, calendar, etc. in its original format without any modification.

While migrating the NSF file data to the Outlook PST format, the mailbox hierarchy remains unchanged. Each folder and sub-folder is maintained at its original place in the hierarchy.

How to convert Lotus Notes NSF file to Outlook PST format with the help of the software?

Follow the below mentioned simple steps to convert NSF to PST file:

What are the requirements to backup SmartCloud Notes data to Outlook PST file?

The only thing required is a Notes client configured with IBM SmartCloud Notes. The software would automatically search for the SmartCloud Notes data with the Search option to add it. Select and add the server and fetch the files from it for the backup.

Does Kernel for Lotus Notes to Outlook require the installation of Lotus Notes before conversion?

Yes, it would. The tool requires the installation of Lotus Notes application before converting NSF files to PST file.

Can I convert Domino Server files (NSF) to MS Outlook?

Yes, you can. The tool supports both Lotus Notes as well as Domino Server files (NSF) and allows you to conveniently convert them to PST files.

Can I export NSF file data to Exchange Server?

Yes, you can. Kernel for Lotus Notes to Outlook software is an advanced migration tool that allows smooth migration of NSF file to PST as well as Exchange Server.

Does the tool marks status as read or unread for specific messages?

Does the tool support batch migration of NSF files?

Yes, it does. The tool facilitates the option to add unlimited number of NSF files at once to migrate to the desired destination. Also, you can add multiple NSF files using CSV file (excel sheet) for an effortless NSF to PST migration.

Can I preview NSF database items before conversion?

Yes, you can preview NSF mailbox items before its migration in both trial and full version.

What are the saving options provided by the tool?

Can I export mailbox folders selectively from NSF to PST files?

Yes, you can. The tool has advanced filters that allow migrating selected items or folders from source to destination. The items can be filtered based on specific date range, categories (mails, Contacts, Tasks), and using other email filters like folders exclude/include options. You can also save NSF data in multiple PST files.

Can I convert NSF emails to PST using the demo version?

Yes, but only limited items. The demo version is designed for evaluating the software before making the purchase. It allows full preview of NSF data including emails, calendar items etc., but allows to save only 10 items from each folder of Notes/Domino NSF file to PST file. To unlock the saving restriction, you've to upgrade to license version.

Kernel for Lotus Notes to Outlook has a user-friendly interface, and it allows NSF to PST conversion in 3 simple steps. 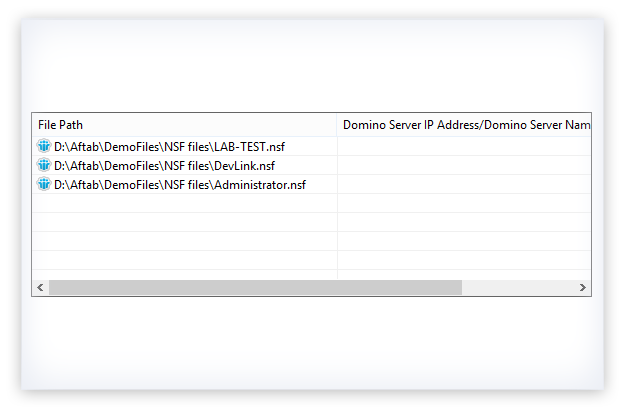 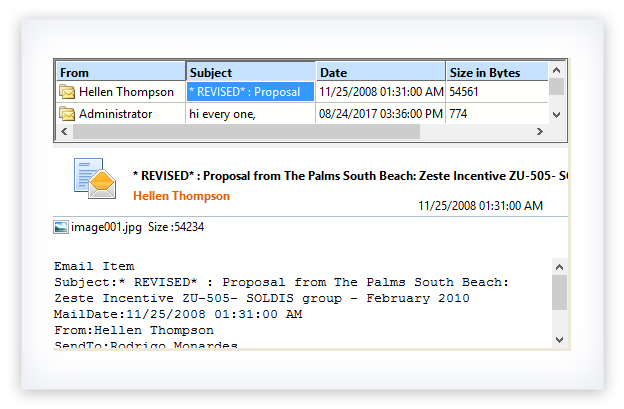 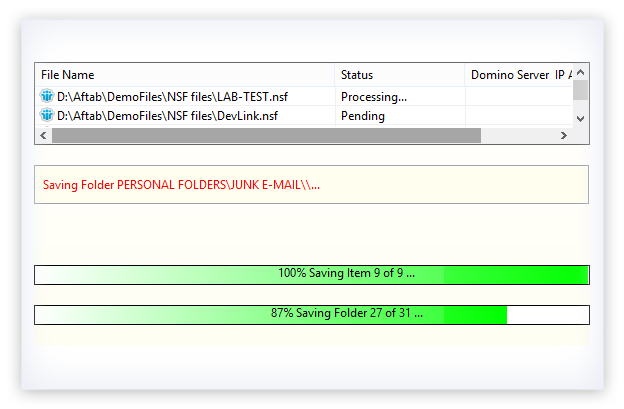 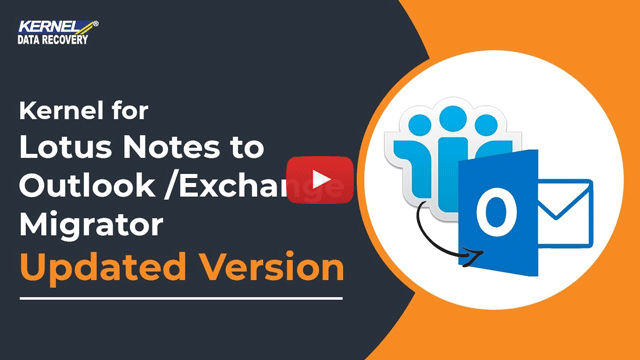 Select any folder item to view its clear preview.

Browse and provide the saving path for PST files at the end of migration. 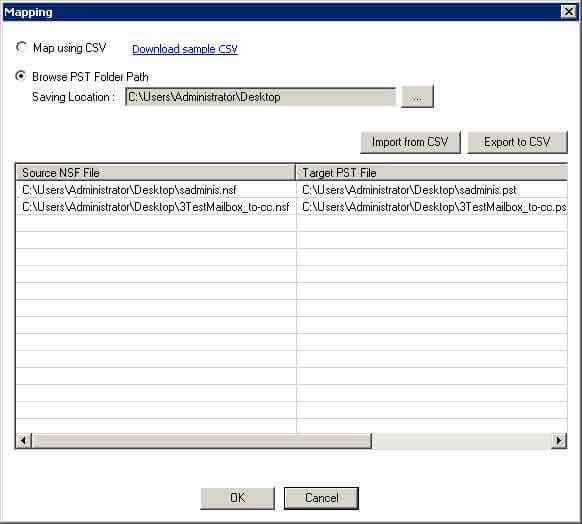 Use various filter options to perform the selective data migration. 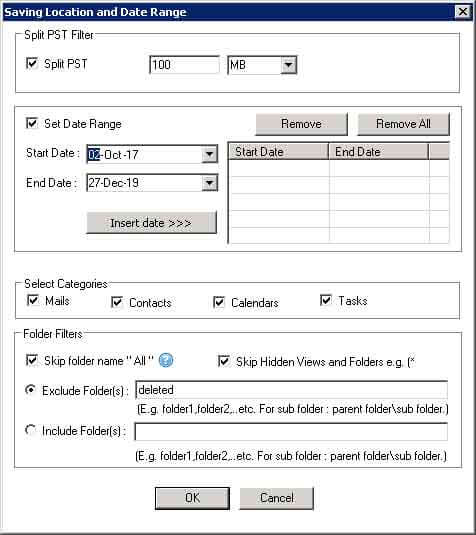 Warning message to close all instances of Outlook while saving files.

View the progress of the migration process.

Migration is completed successfully with a confirmation message.

Welcome the latest Kernel for Lotus Notes to Outlook version 20.3, which now performs quick conversion from Notes NSF to Outlook PST file. The new version offers improved SMTP server support for the conversion of sender/receiver data. It can now replace unsupported/invalid characters from the source NSF files while saving to Outlook PST file format. Users can perform smooth conversion with a more precise folder skipping option. It now provides Migration Logs with all the details about the migrated content. The new version has got some minor bugs fixed too.

Releases the updated Kernel for Lotus Notes to Outlook

Kernel for Lotus Notes to Outlook version 20.0 has been released. It now backs up SmartCloud Notes/Verse to both PST and on-premises Exchange Server and provides better folder skipping and migration logs. Overall, it offers advanced features for its users, meeting all their expectations.

The latest version of Kernel for Lotus Notes to Outlook is released!

Good news for Lotus Notes users who want to migrate to Outlook. Kernel for Lotus Notes to Outlook has got an update (version 19.2). The new version includes a feature which allows users to mark messages as read or unread after migration. It now has advanced algorithms that provide improved speed in migration and saving of data. Some minor issues have been fixed to improve the calendar saving performance in Notes to PST migration.

Kernel for Lotus Notes to Outlook released with updates

The latest version of Kernel for Lotus Notes to Outlook has been released (version 19.0). This updated version offers some extensive features, such as enhancement of software filters and better migration speed. The latest update allows easy migration of Domino Server files to Exchange/Outlook. Also, the sender and receiver email address display has improved now. With these improvments, the tool is more useful for its users now.

Another version of Kernel Lotus Notes to Outlook has just been released. This version, 18.5 is improved with better migration speed. And, some minor bugs have been fixed to make the migration process swifter. The new version ensures complete migration of metadata like From, To, Cc and Bcc. With these new enhancements and improved algorithms, the tool facilitates complete and secure Notes to Outlook migration.

Releases a new version of Kernel for Lotus Notes to Outlook (v. 18.4)

Kernel for Lotus Notes to Outlook gets an update. In the new version 18.4, the user interface of the tool has been simplified. Users can now easily use a CSV file to perform the bulk migration and map the source mailboxes to destination mailboxes. The free version of the tool now migrates 10 items per folder from both Lotus Notes and Domino Server NSF files. The new version performs better and supports latest versions (including Exchange 2019) for migration.

Kernel for NSF to PST is out now with its new upgraded 18.1 version. The software has several improvements to ensure smooth migration. It has a more user-friendly GUI and it works smoothly with all the latest software versions.

The latest version of Kernel for Lotus Notes to Outlook 17.2 has been released with many significant updates. Now the post-migration quality of embedded attachments, images and other mail content has improved remarkably. The conversion of Contacts and User groups has become quite smooth. Users can easily convert a number of user groups containing the contact information. Additionally, the new version of the tool offers better Unicode language mail conversion.

The latest version of Kernel for Lotus Notes Outlook (17.1) has been released with many performance enhancements. The tool now offers smoother conversion of large NSF files and NSF files having large messages. After some minor bug fixes, the selection of date from the calendar (for the filtering of mailbox data) has become easier. Overall, the new version ensures quick and effortless Notes to Outlook conversion.

Lepide Software Pvt. Ltd. announces the release of refined version 15.8 of Kernel for Lotus Notes to Outlook. The latest version 15.8 is equipped with intuitive email filters that can assist users perform the Lotus Notes migration by extracting the specific folders and items. Moreover, these agile filters can accurately export specific emails that falls under specified date range. Also, the upgraded version 15.8 is fully compatible with Windows 10, 8/8.1, MS Outlook 2013, 2016, and MS Exchange Server 2016.

Lepide Software Pvt. Ltd. announces the release of updated version of Kernel for Lotus Notes to Outlook. The new revised version 13.04.01 is intelligently programmed and supports 2013 edition of MS Outlook to complete the NSF to PST conversion process. The new version is easy to operate and now very much compatible with Windows 8 OS.

Updated version of Kernel for Lotus Notes to Outlook software released today. This update being master of the previous release is more robust, attractive and user friendly in terms of navigation and migration process.

Attractive and easy to use software interface, result oriented features plus reliable performance of Kernel Lotus Notes to Outlook makes it stand differentiated from other exchange migration software.

Nucleus Data Recovery today announced the release of Kernel Lotus Notes to Outlook software. The NSF to PST Conversion software is a perfect tool when you need to convert Lotus Notes (.NSF) files to MS Outlook (.PST) files. Software quickly performs the NSF to PST operation and lets you view Lotus Notes emails with MS Outlook. Equipped with two conversion modes you can convert single or multiple .NSF files at a time.

The idea of migration was based on quick accessibility and technical divergence features observed in Outlook platforms. German Sales Agency was not in condition to lose the data as there was no backup available.

Whoa! It serves data migration to both the vital destinations - to Outlook as PST file and directly to the Exchange Server mailbox. It is a package of exceptional qualities and facilities delivering a clean migration in minimum efforts.

Best at everything! Lookout, features, functions, or output. Trust it blindly.

My friend had already used this tool for migrating Notes data to Outlook and suggested me this with full excitement. I was still not sure until I analyzed its robust features with the free demo version. This tool has everything in the place. Finally, I can say with full confidence that this is the only tool which you can trust for Notes data migration.