MS SQL database corruption, can cause a lot of troubles to the organization owing to the criticality of the data contained in the database. Fortunately, many SQL Server recovery tools are available in the market. We will try to understand the features, working Read more...

SQL Database Recovery software is absolutely incredible. Yes it is brilliant. It took just few minutes to download and run the software and recover deleted records from corrupt MDF file. I must say, you can rely on this software. Try the software once.

I must say thanks to your software development team for developing such a user-friendly SQL recovery software. I lost all hope to fix the MDF file error and restore the data, but after using this MDF Repair tool it didn’t take long to fix the error and recover lost data right from corrupt MDF database

I faced an error- "Server can't find the requested database table", and was not sure about how to resolve it. I searched out for solution and found this SQL Database Repair tool. To my surprise, I was able to fix the entire issue in just a matter of a few minutes. Thanks to technical support team

Repair your corrupt MS SQL database (MDF/NDF files) that has come to halt, due to corruption problems in MDF/NDF files, from reasons like hard drive failure, media contamination, and virus intrusion etc. The tool fixes the MDF/NDF file errors and restores all SQL database files.

SQL Recovery tool allows the recovery of MS SQL server backup files and allows creating the script file(s) for restoring the deleted records separately. You can create a new database and save data directly into it.

SQL Database repair software also comes with advance setting which assists user in retaining the integrity of the restored objects even after the successful completion of SQL database recovery procedure.

The recovery software has two recovery or scanning modes to scan the added SQL database file – Standard Scan and Advanced Scan. The former scan mode is used for quick processing and is generally recommended. The latter scan mode should be used when the “Out of memory” message appears.

The tool is programmed with advanced algorithms which have the capability to detect and select the SQL database version. There is another way as well to select the database version, i.e. manual, by selecting it from the provided list.

The preview gives a perfect glimpse of what your recovered data will look alike—tables are represented in hierarchical order. The tool provides a preview of maximum 1000 records in a page. The user can select any table to view its components further and verify the data authenticity before saving.

MDF recovery tool supports UNICODE characters for database recovery so that user can restore the data in different languages. The user will face no more readability issues after recovery. 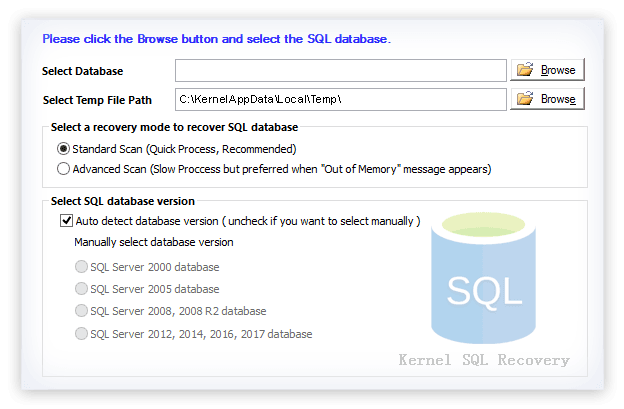 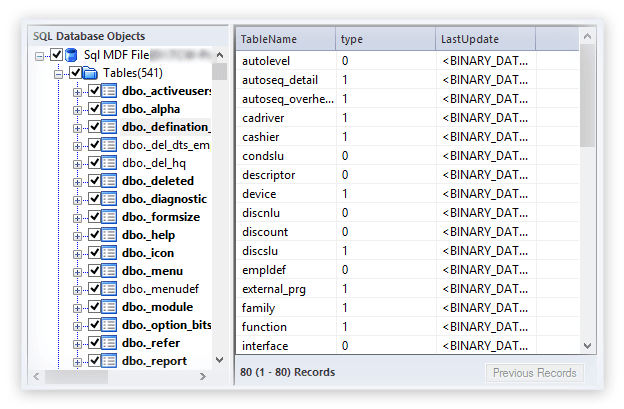 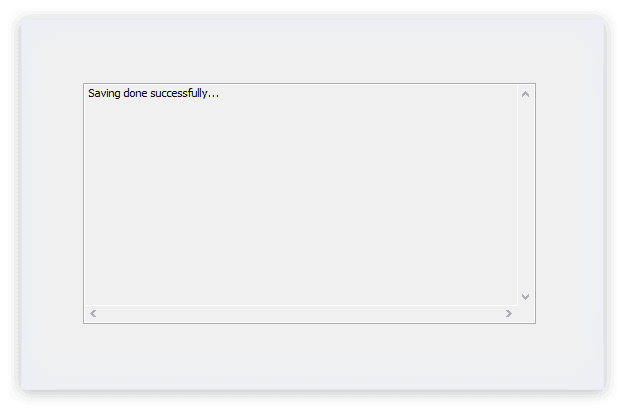 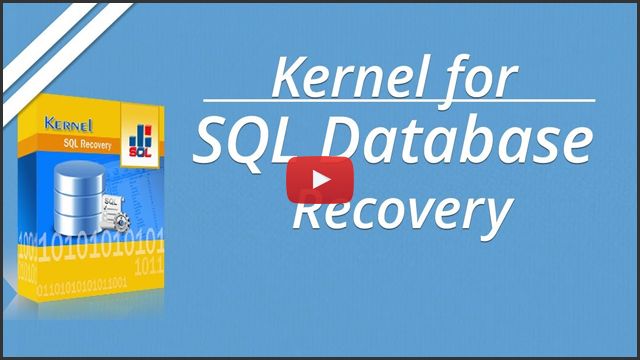 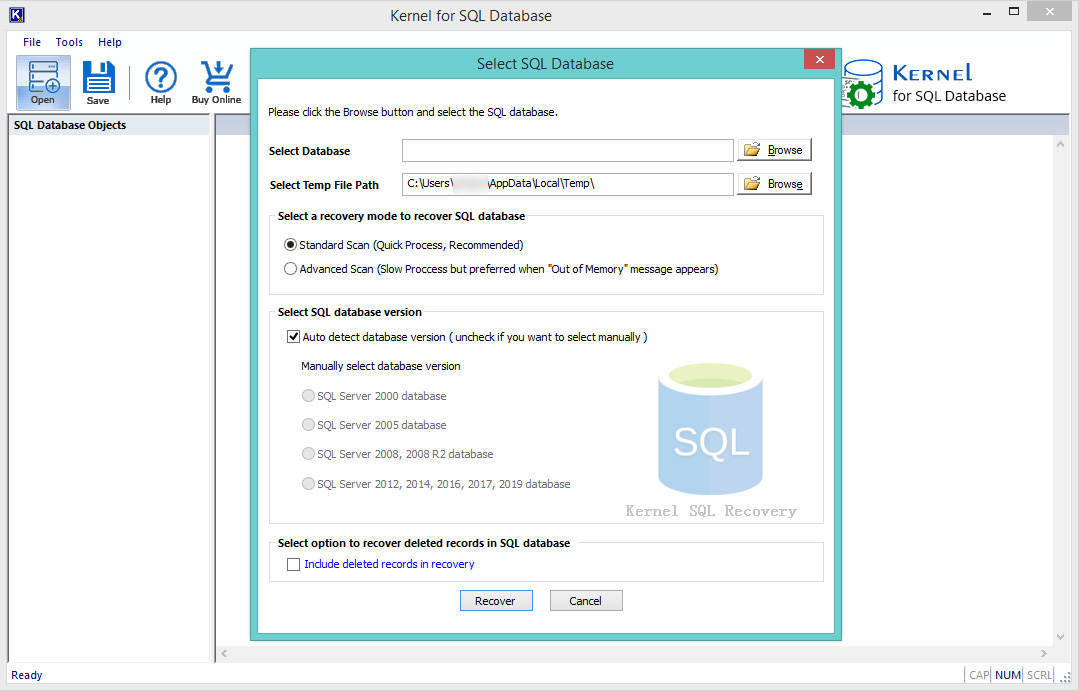 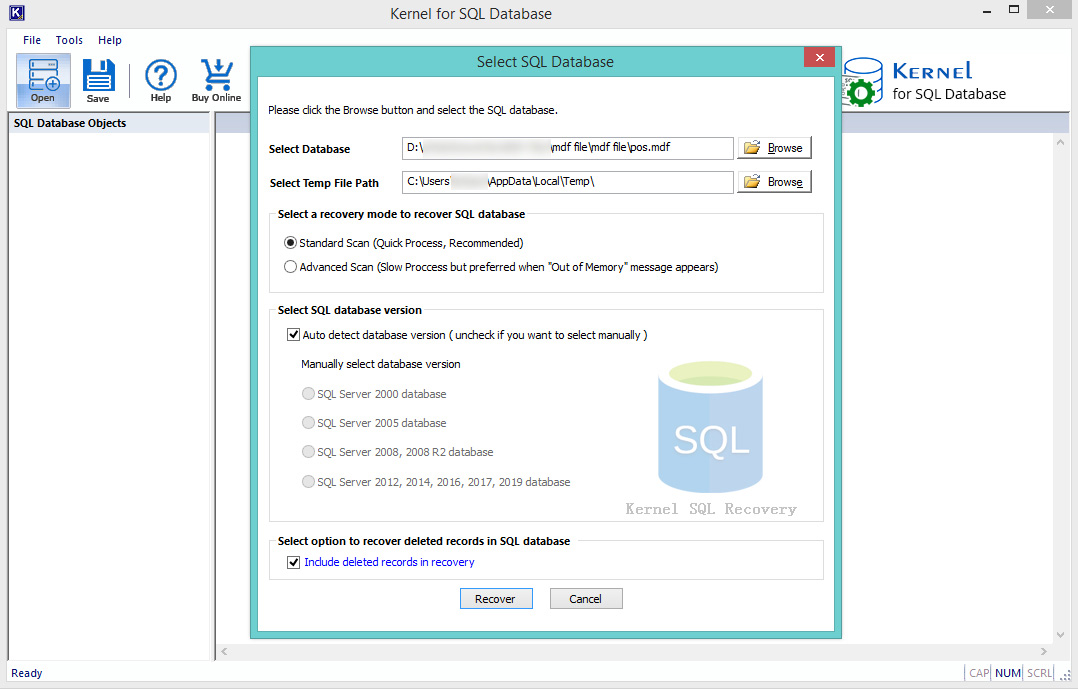 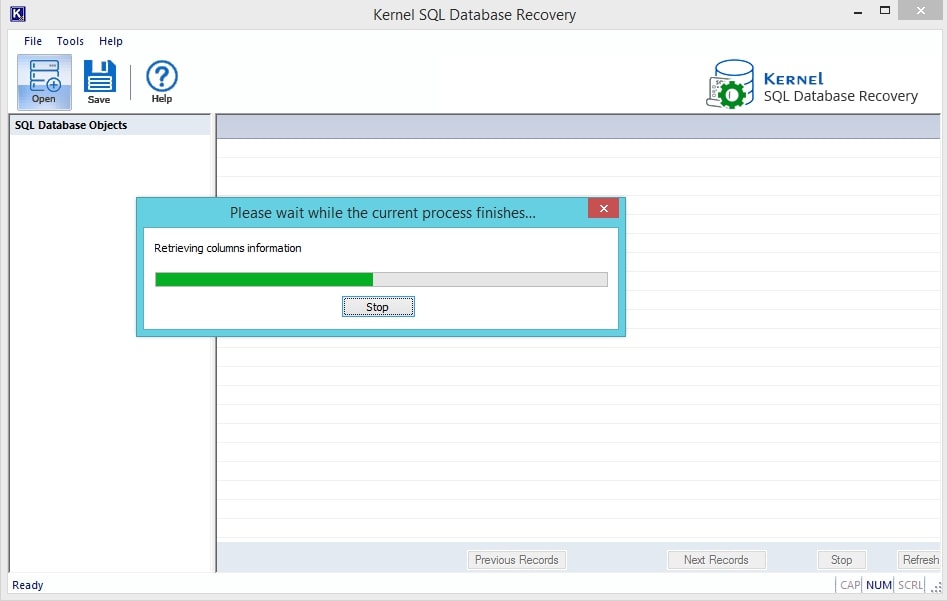 Get the clear preview of selected data. 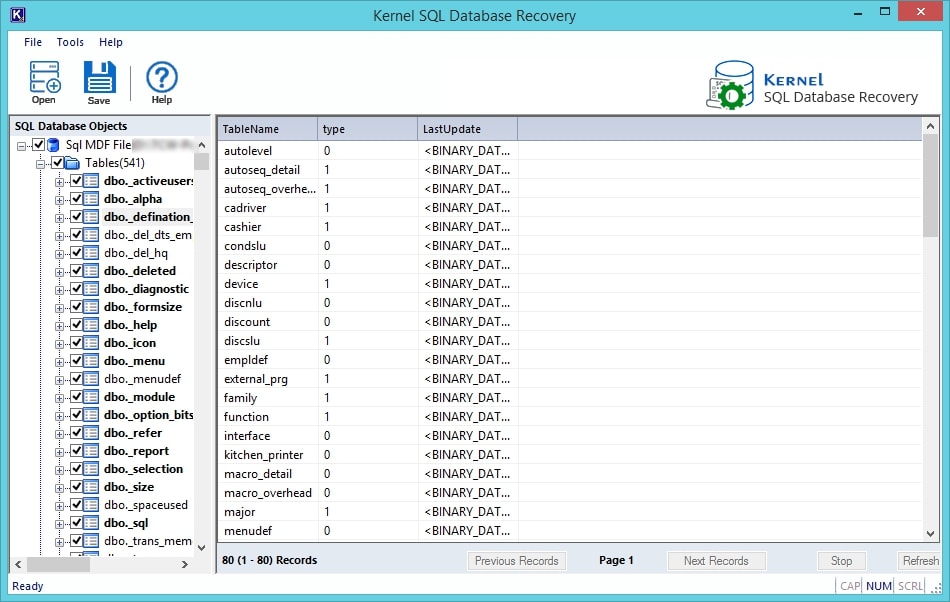 Save data directly to SQL server through log in details. 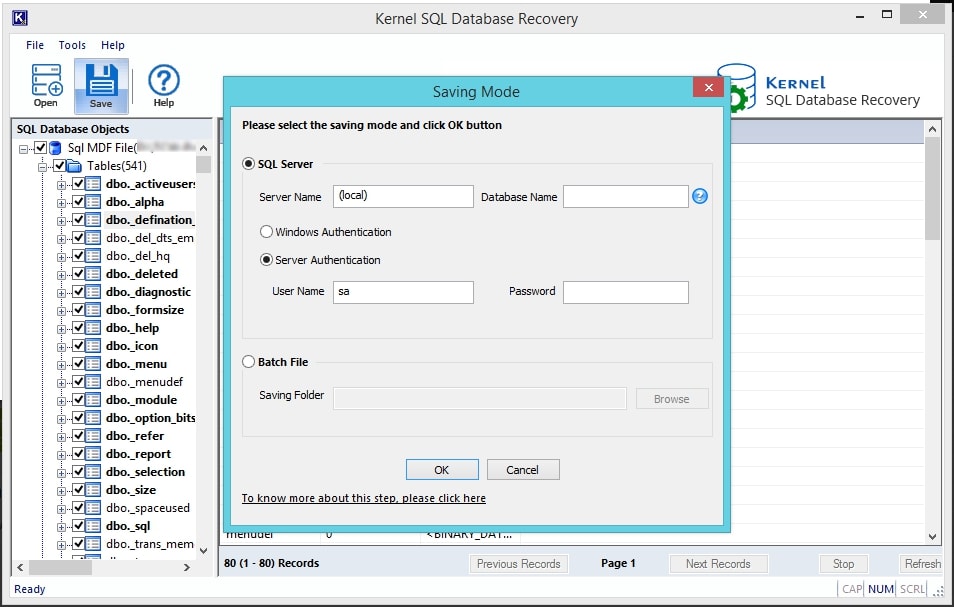 Save Batch file at desired location. 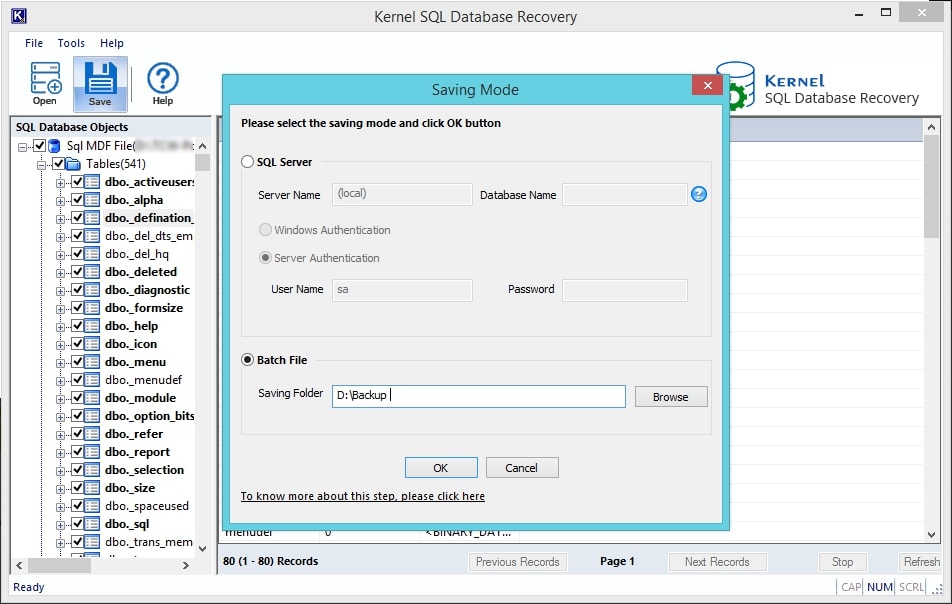 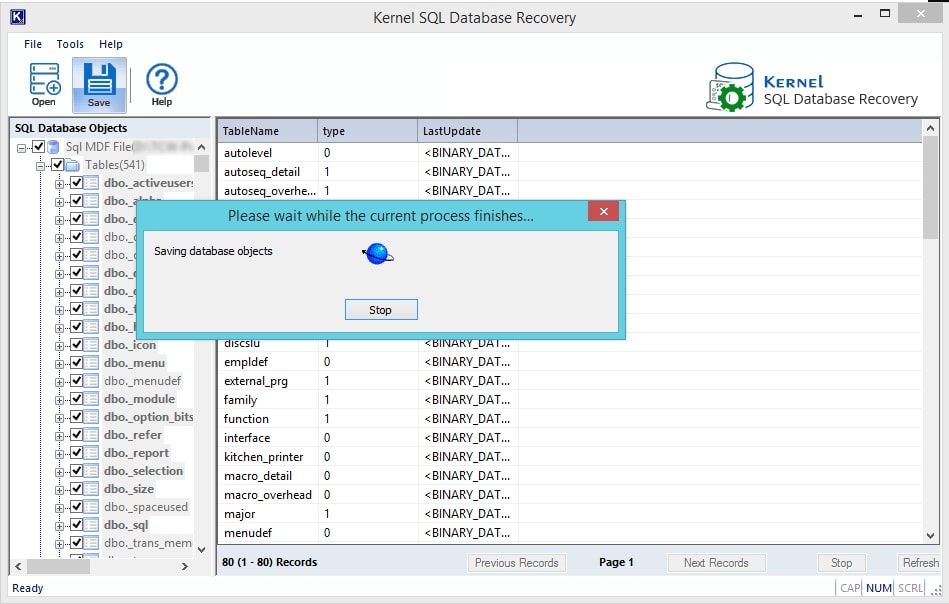 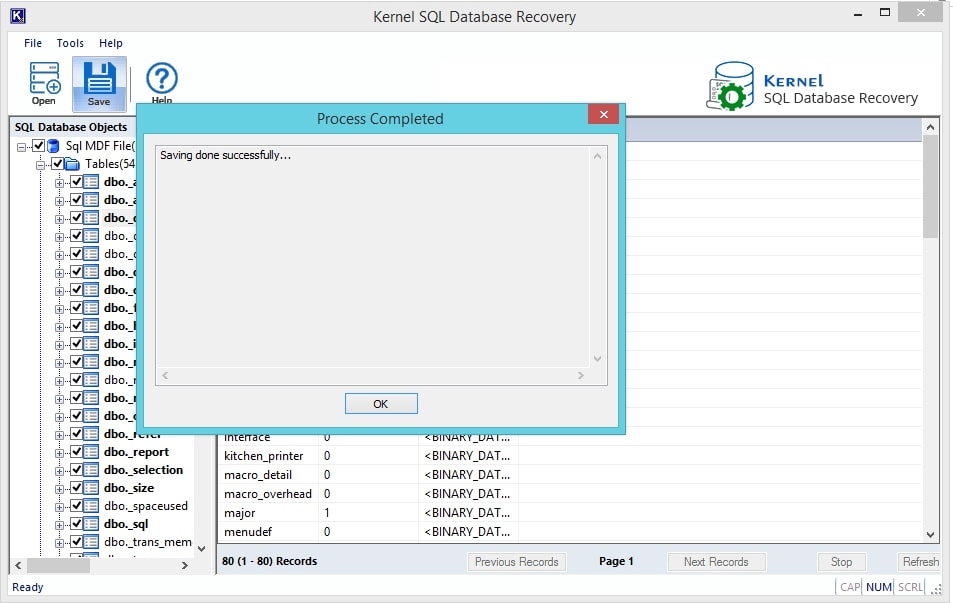 No manual method was working for me with my corrupt MDF file until I used the software. I am really great full to the designers of the software.

Now, no data is loss of our business as the SQL recovery software takes care of every kind of corruption, and data is recovered.

It is a gem in SQL database recovery, and the data is directly saved to a SQL account.