The Software smoothly migrates your public folders on all cross-forest Exchange environments (including Exchange 2003/ 2007/ 2010/ 2013/2016/2019). It helps you to avoid the complex public folder structure and focus on the migration better, without worrying about its sprawling size.

You can immediately undo a wrong/mistaken migration task (in few clicks) without losing your head. It helps to keep up your migration pace as fast as possible, as if nothing went wrong.

Specify what you want to carry in the public folders migration based on the defined date range, include/exclude criteria, message class(es). You can also apply filters on the migration jobs to migrate the data that matters to you.

The solution lets you to execute the migration according to your convenience based on resource availability and other factors. The Scheduler allows you to create and execute a job automatically whenever you need. You can even define the blackout duration when you want to halt the migration, and it will resume afterwards.

The Public Folder migration software helps you to maintain co-existence between the migrated and non-migrated mailboxes. While carrying out the migration, the solution lets you to synchronize your mailboxes from source to target or target to source, which eventually eliminates the data integrity issues. 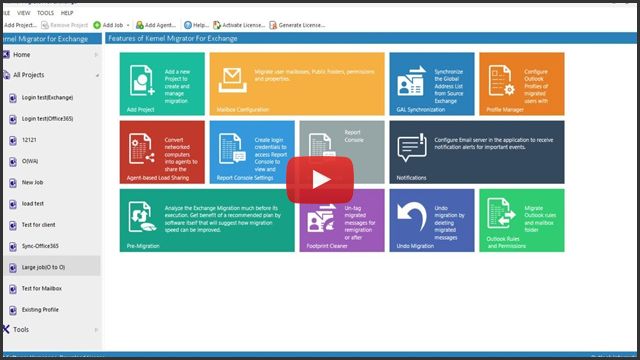 What all scenarios are supported for public folder migration?

When I migrate Exchange public folder to another domain server, then what happens to the existing Public Folder Rules and Permissions?

Kernel Migrator for Exchange allows you to migrate complete data from Exchange public folder to another public folder in cross-domain environment. You can move your existing rules, permissions, Global Address List as it is from source to target location.

Does your program delete anything from the source public folder?

No. Kernel Migrator for Exchange does not delete or modify any information from the source server. It passively accesses your public folder data, without making any alterations to the contained data and its integrity.

Yes, you can. The solution allows easy migration of large-sized public folders from the supported source to the destination server.

Yes, it does. You can migrate public folder from Exchange to Office 365 mailbox along with its limits, properties, and permissions.
Software Guides