Kernel for
GroupWise to Exchange 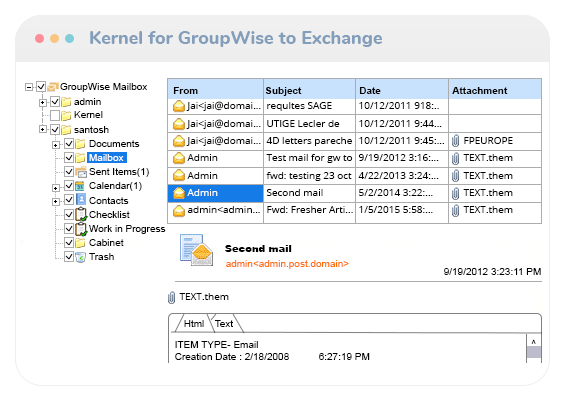 BenefitsKernel for GroupWise to Exchange

Our hard work was to develop a user-friendly GroupWise to Exchange migration solution. I think we made it possible.

It was a challenge to move Novell GroupWise mailboxes to Microsoft Exchange Server in a single day. My boss introduced me to this tool, and that is it. Got the migration completed in minutes. I like its professional approach very much. Excellent tool for all GroupWise organizations.

I am very much satisfied with the performance of the Kernel software. The software has many functionalities that helped me to have lots of alternatives and choices in channeling the process of GroupWise to Exchange Server transition. The concept of batch files is truly outstanding as it saved my time and efforts in carrying out the multiple mailbox conversion into PST files.”

I was pretty much hopeless about the conversion thing as I was not confident in recovering all the companies GroupWise mailboxes into the different technology. But, Kernel for GroupWise to Exchange solved my problem and provided the absolute and accurate solution. I was truly amazed to see that the whole conversion process took very less time. Thanks and Hats off to the software.”

The software has saved my precious time of migrating the GroupWise based mailboxes into the PST format. I can easily handle and manage the software as the functions provided in the interface explains its usage itself. After the complete conversion of GroupWise mailboxes, I checked the data items and haven’t found any discrepancies in the final version of PST files. ”

GroupWise to Exchange migration is foolproof owing to its prominent features. Let us have a brief introduction.

GroupWise to PST (Outlook) Now save the GroupWise mailbox data to PST files. it requires only 3 steps to complete the process and all the data will migrate to the PST. The PST file will be saved in the specified location and you can instantly access it in the Outlook application.

Migrate Archive Items There is a special feature to migrate the archive items from GroupWise. The tool accesses the archive path of the default Outlook profile or the user-defined archive path. Then, it will show its preview, and let you save it at a desired destination.

Recover Deleted Items The software not only migrates the existing data, but it also recovers and migrates the deleted items. It accesses the Trash folder of GroupWise mailbox, retrieves the data, and allows you to migrate it along with the other data.

Include/Exclude Folders This software provides the flexibility to include or exclude GroupWise mailbox folders in migration. This is done just by checking or unchecking the respective folders before exporting the GroupWise data.

Customize Export Alternatives The Kernel for GroupWise to Exchange software has various options in the form of checkboxes which includes the following list: Mail, Calendar, Tasks, and Contacts. You can select any or all the options provided in the Export Options field and proceed with the export procedure.

Multiple Connectivity Options The software has three important modes for making the connection to the GroupWise mailboxes to get the access of mailbox data items to convert it to the Exchange Server files. The Default, Login, and Command line mode offer different functionalities according to the demand of the situation. With Proxy Access you can also connect multiple mailboxes.

Secure and Accurate Migration The tool accurately migrates the entire mailbox data (message, sent items, calendar, contacts, documents, archives, cabinet, trash items, etc.) without any changes. So, you will not face any issues either in GroupWise or in Exchange environment after the migration.

Limited saving with the trial version There is a free version of the software that you can download. You can evaluate its all capabilities and perform migrations. It will give you a preview of all the items you select but will migrate 10 items per folder to the destination.

What is the limitation of the Demo version of the software?

Demo version of the software is free to download. It will show you all the data which can be migrated from GroupWise and also it´ll save 10 items from each folder.

If you can see all your data in the demo version, it is a guarantee that the full version of the software will save your entire data.

So, for saving entire data, you need to purchase the license of the software.

What are the saving/migration options available in the software?

Is there any limitation on number of mailboxes which can be migrated?

Yes. The software does provide an option for Batch File Migration.

Does the software create log file for the migration?

Yes. Software creates log file every time migration is performed so that a user can get a clear idea about the tasks that are being performed by the software.

Can a single/individual mailbox be saved into the PST or Exchange?

How can I migrate GroupWise files to Exchange Server using Proxy?

Step - 1:Launch Kernel for GroupWise to Exchange software select an mode to continue with:

Select the "Single mailbox/multiple mailboxes using Proxy" radio button, and then click the Next button.

The next window displays three modes to connect to the mailboxes of Novell GroupWise and archive selection option: Default mode, Login Mode and Command Line mode.

Step - 3: If you select the "Use Default " option to connect to the GroupWise mailbox in Default mode. This option is enabled by default in the software. Activate and select the Archive file options to migrate archived emails too. Click Next.

Step – 7: Click Export button to continue. Software will ask you to select the Save option to save the converted file in PST or migrate to Exchange Server/Office 365 user profile.

Step – 8: Select the save options: "Save in PST" or "Save in Live Exchange/Office 365" radio button to save the converted mailboxes in PST, MS Exchange Server, or Office 365.

I am trying demo but cannot see the data, what should be the next step?

You can contact our 24*7 dedicated support team from below means and they will assist you with the recovery.

Is there any Money Back Guarantee?

Yes. You can check out our refund policy at https://www.nucleustechnologies.com/Refund-Guaranteed.html

Do you have any technical question regarding the software?

If yes, email it to us at support@nucleustechnologies.com and we´ll assist you promptly.

How long the license of the software is valid for?

The license validity is for lifetime. There is no additional cost for license renewal.

I want to move only the contact details to Office 365. Can I do that?

Yes, surely you can migrate the contact information selectively. On its Filter Selection window, there is a feature named Item Type filter. Just check the Contacts option and uncheck all the others.

Are upgrades and Technical Support free?

Yes. Software upgrades and Technical Support are free for lifetime.

Is the tool compatible with Office 365 Business only?

I placed an order. How much time should I wait for the delivery?

The software and the activation key is delivered via email within 15 minutes of placing an order online.

In case, you do not receive the details within the stipulated time, you can contact our dedicated 24*7 support team at support@nucleustechnologies.com and they will provide you the license immediately 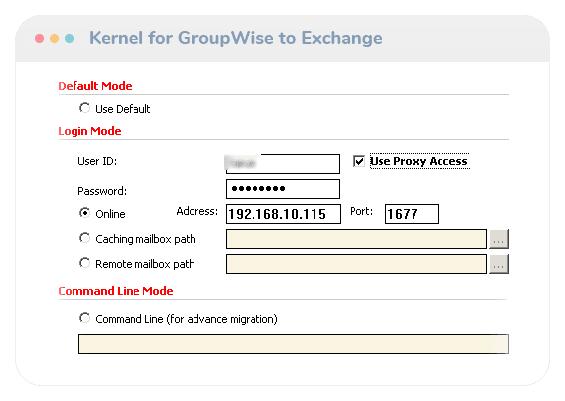 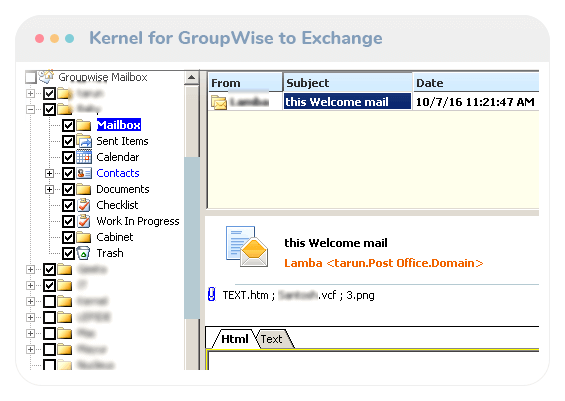 STEPS TOMigrate from GroupWise to Exchange 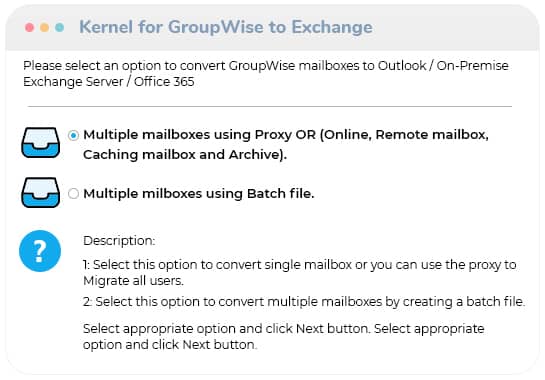 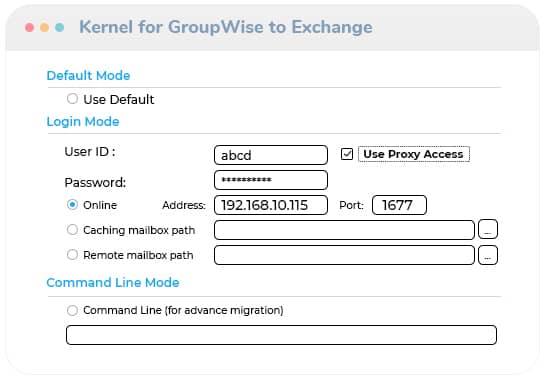 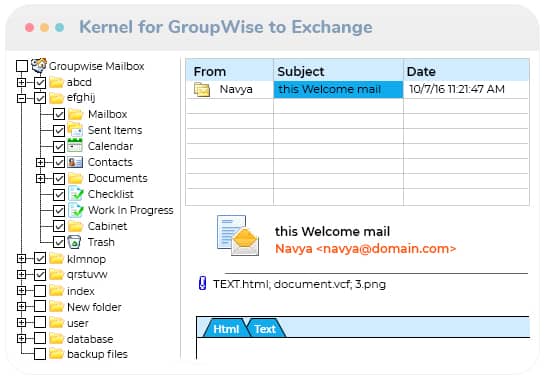 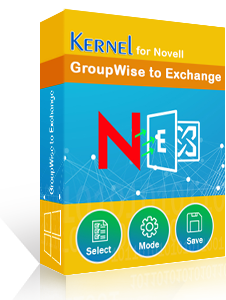 Technician License For service providers to use for multiple organizations

Kernel for GroupWise to Exchange

The Tool enabled me to preview the information of the selected item from the source & destination lists. So glad that I installed this tool.

It is really good to have such software that can support any kind of migration from GroupWise to Exchange. It remains one of the most useful software in our organization.

I got the best filtering options to select the desired files to migrate.

Welcome screen of the software displaying the two options of migration. 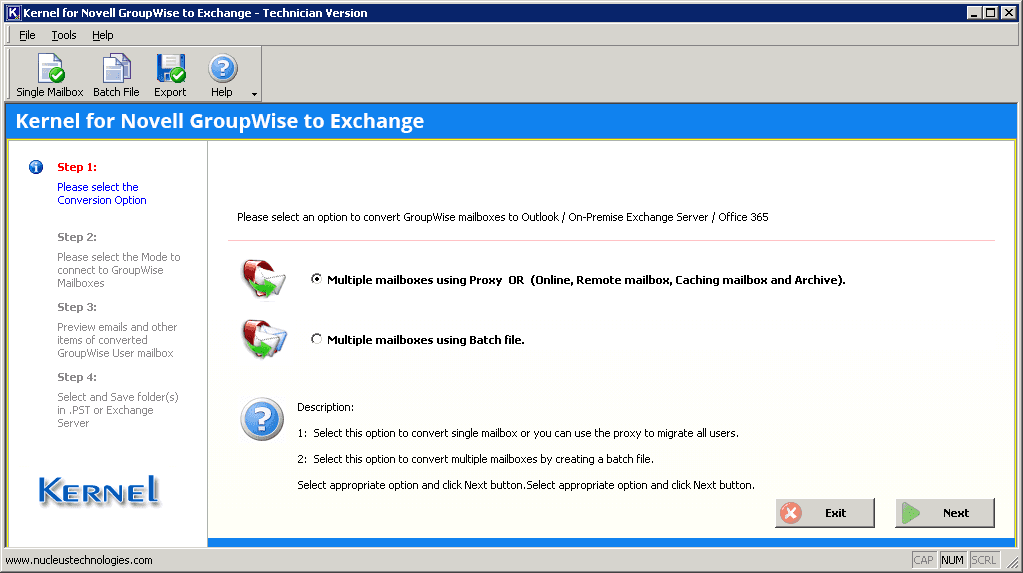 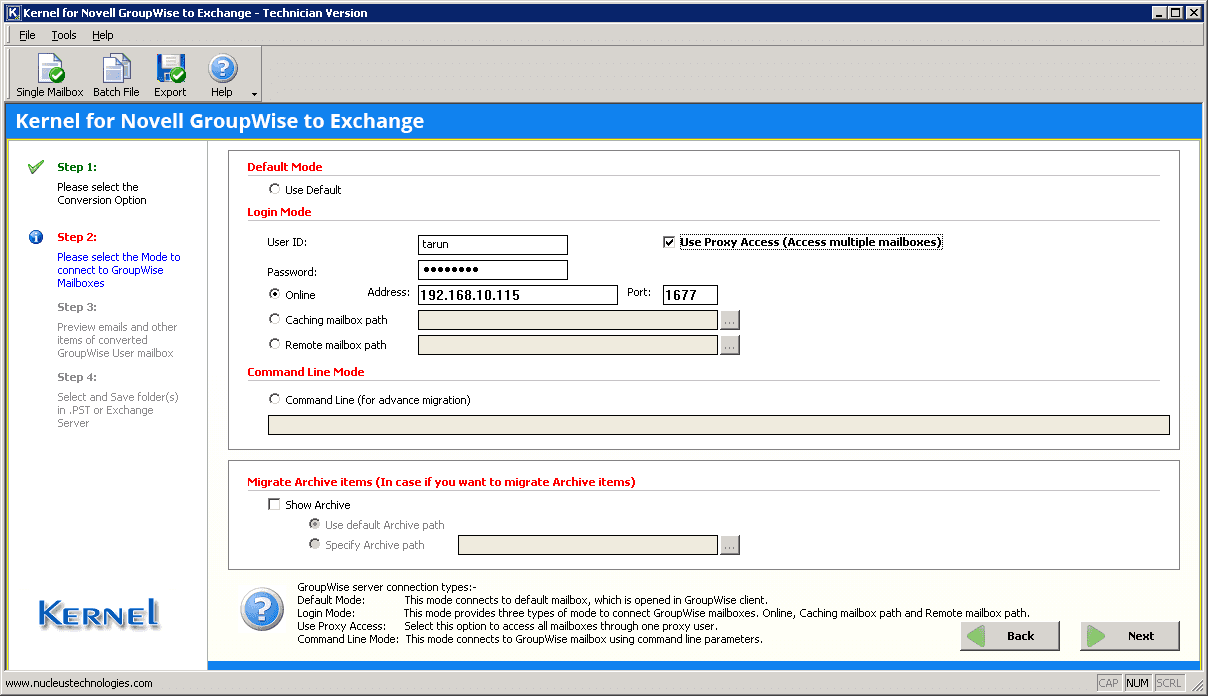 Preview of GroupWise data after scanning of mailboxes and extraction of items. 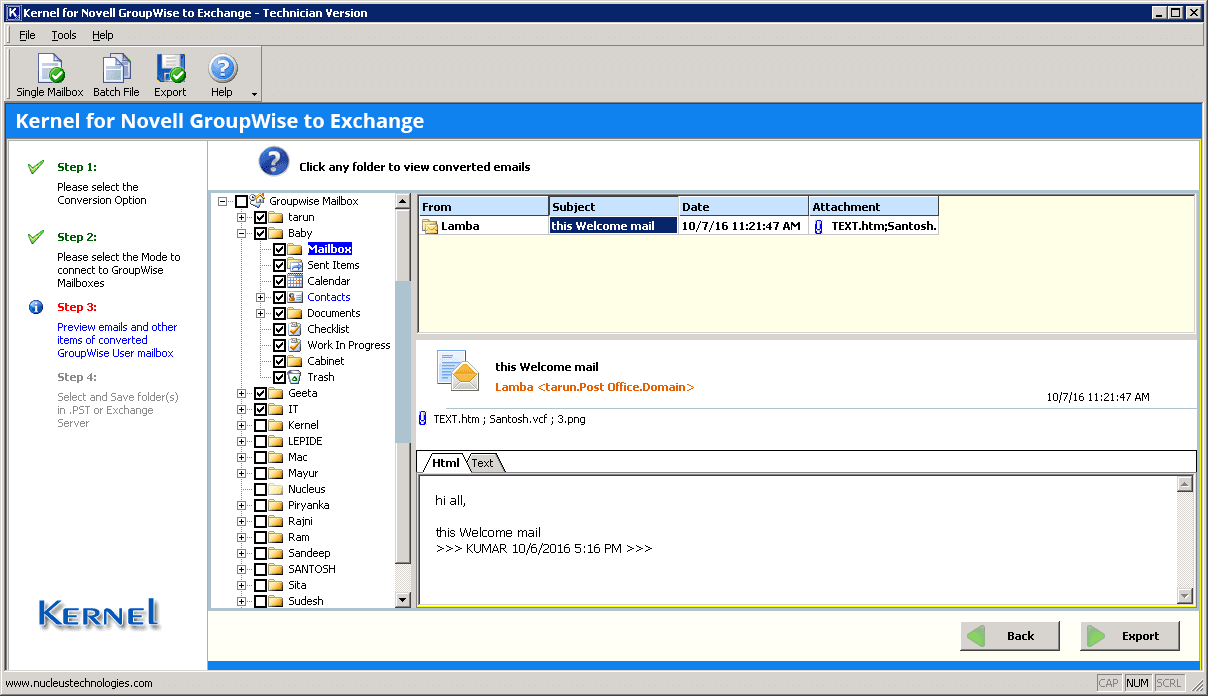 Save GroupWise mailboxes to PST or live Exchange/Office 365. 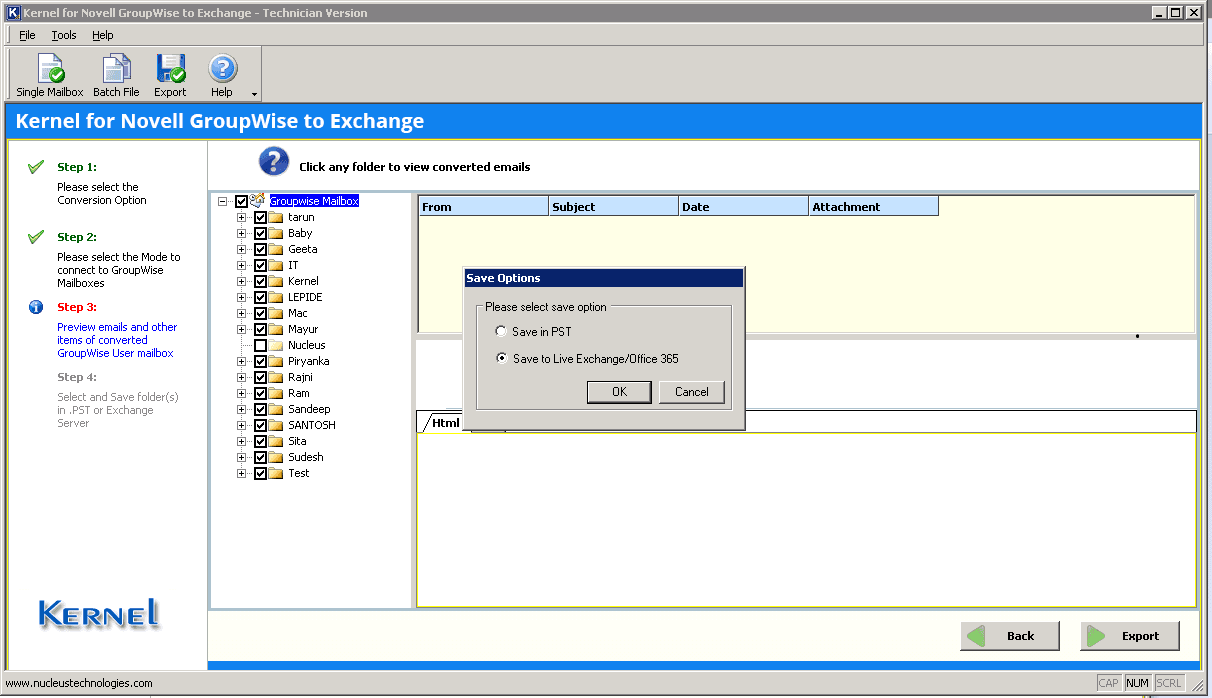 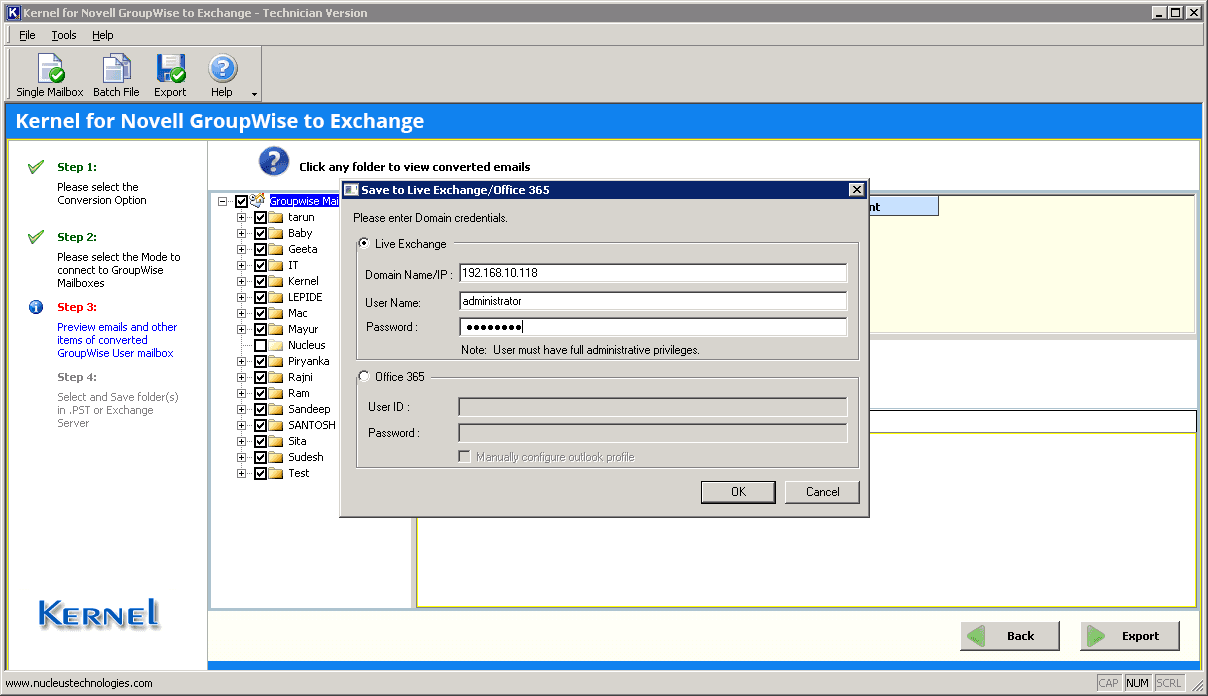 Confirming the credentials for the destination Exchange. 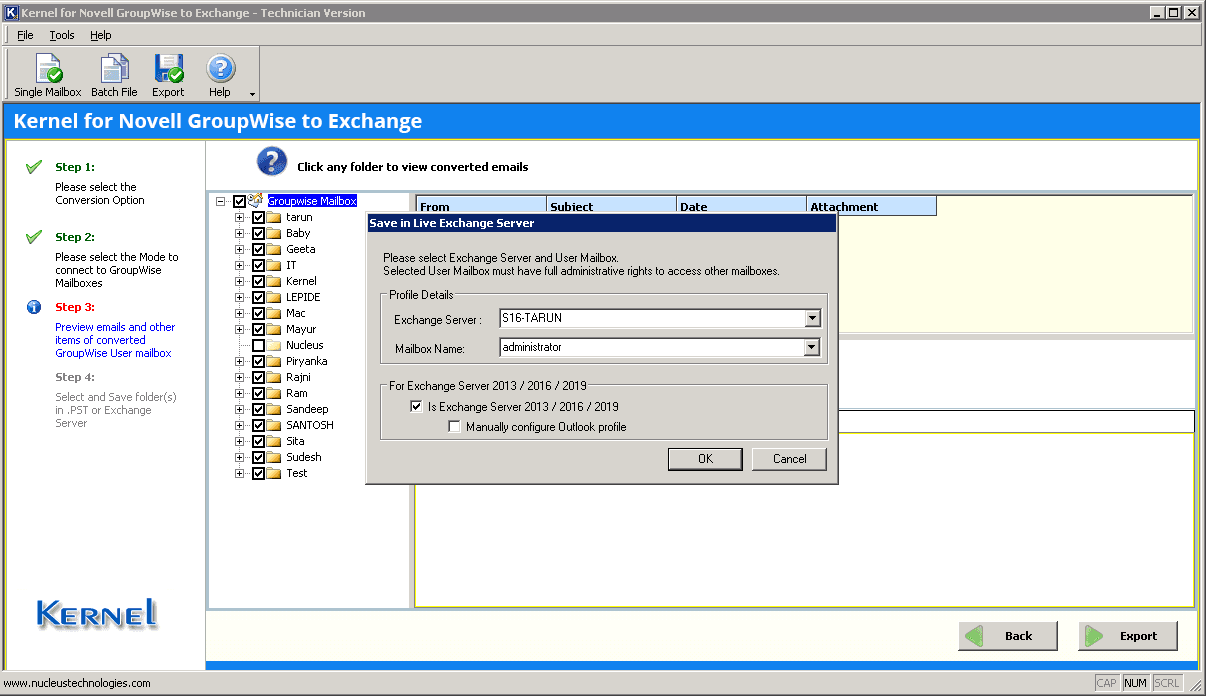 Mapping between the source and target mailboxes. 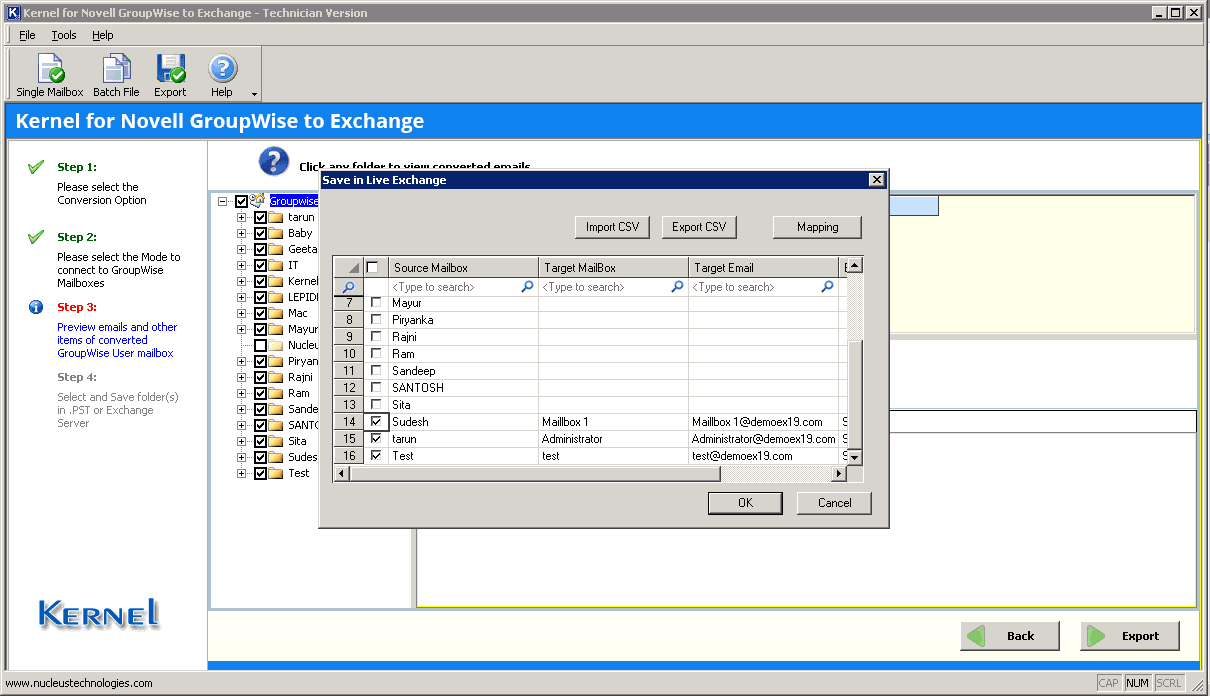 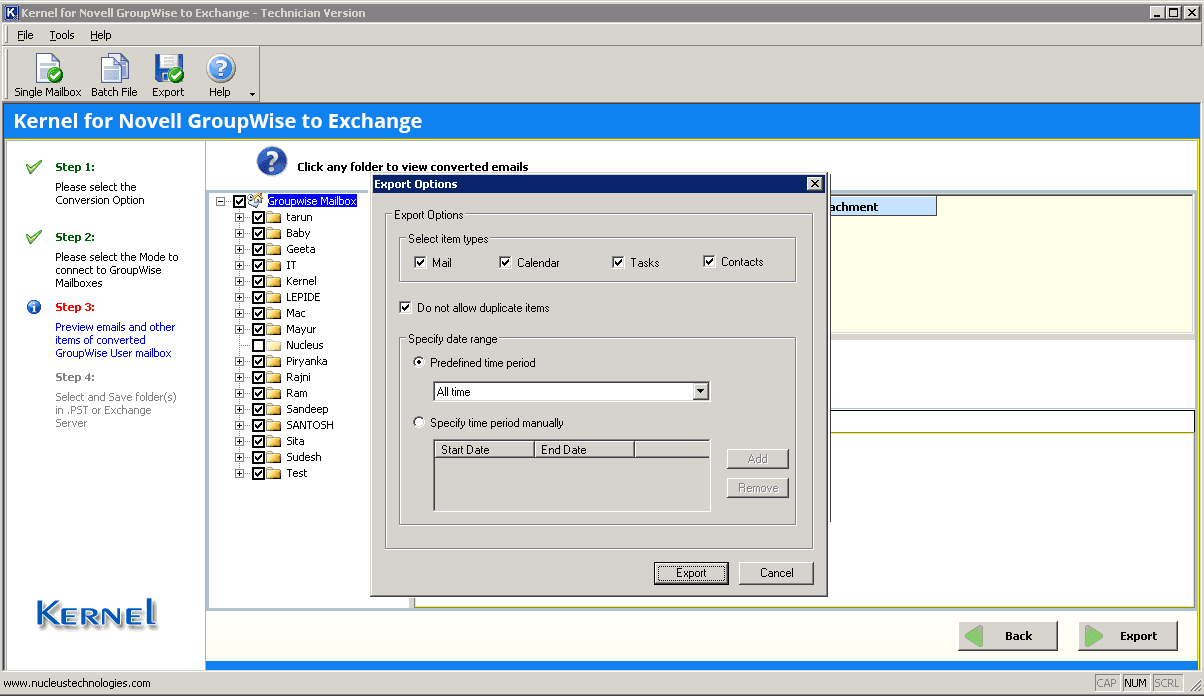 GroupWise to Exchange migration in progress. 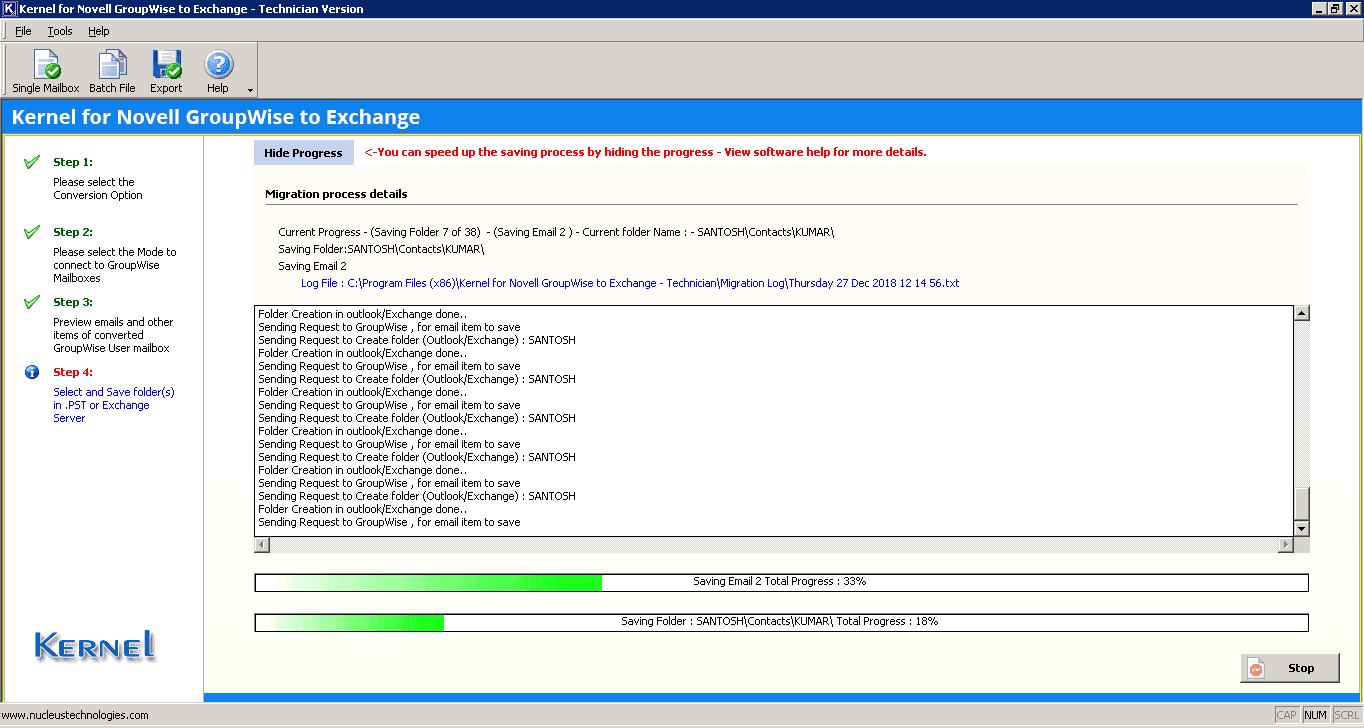 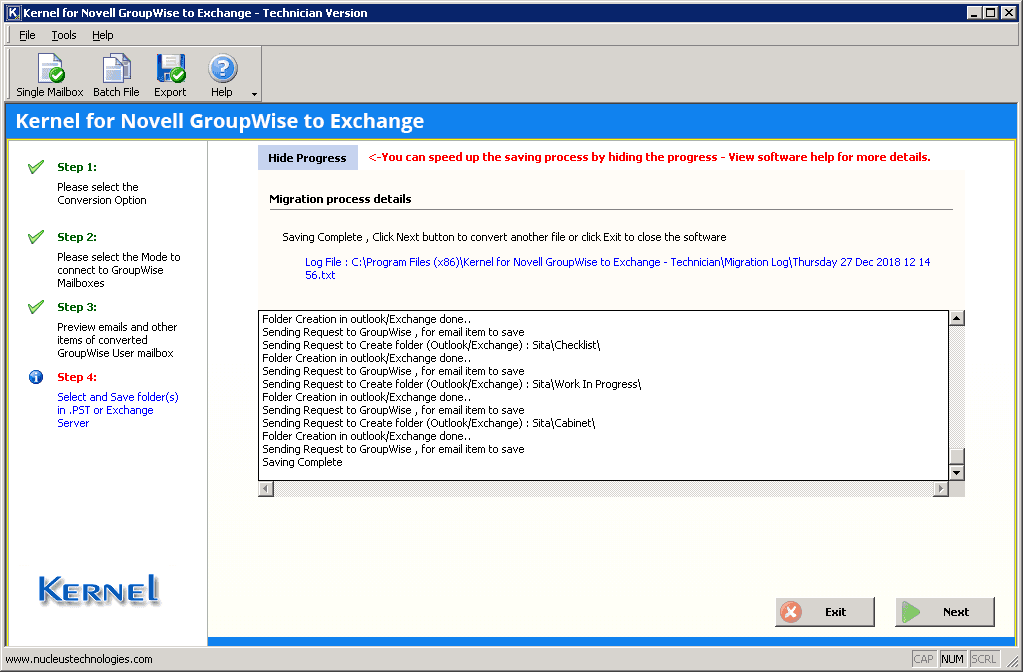 Releases the updated version of Kernel for GroupWise to Exchange

Kernel for GroupWise to Exchange has been updated with improved migration features for contacts, calendar and Global Address Book. The new version 20.7 provides better Proxy Access connection also. It has the option to perform incremental migration and to stop duplicate items from the migration. All these improvements in the migrator software are going to benefit the users a lot.

The launch of Kernel GroupWise to Exchange 20.0

KernelApps updates Kernel GroupWise to Exchange 20.0 with new features. Now it connects better with GroupWise mailboxes by proxy connection; the migration speed has also increased. Now users can exclude the duplicate items during migration from GroupWise to Exchange/Office 365. With these added features, the tool is more beneficial for users.

The updated version of Kernel for Novell GroupWise to Exchange (19.0) has been released. This version offers enhanced GroupWise connectivity with Proxy access. Also, it now integrates a more user-friendly interface. After some minor bugs fixes, its Batch migration faster and more precise.

Continuing its tradition of bringing new features to its software, Kernel has again brought some major updates in Kernel for Novell GroupWise to Exchange 18.5. Now it has improved connectivity for multiple mailbox(es) using Proxy Access. Also, it easily accesses GroupWise Address Book with any Outlook version. Some other useful changes are updated user-interface and increased migration speed.

Lepide Software Pvt. Ltd. announces the release of a new improved 17.0 version of Kernel for Novell GroupWise to Exchange. The new up-gradation performed in the software enables it to connect and migrate data to Exchange Server 2013/2016 and Office 365 effectively. In addition, the upgraded software also works immaculately with with GroupWise version: 2014. Also, the tool now supports better connectivity to bulk users of Novell GroupWise through proxy access.

Lepide Software Pvt. Ltd. announced the grand release of the latest Kernel for GroupWise to Exchange 16.0 software version. The new and upgraded version is now easy to operate and apart from providing solution to migrate GroupWise mailboxes to Outlook PST files, one can also migrate mailboxes to cloud-based Office 365 accounts and Live Exchange Mailboxes.

Lepide Software announces the launch of updated version of Kernel for GroupWise to Exchange. With the updated version, you can add date filter to convert the mailbox data that belong to that specific date only. It also allows one to select the particular data using various filters and convert selected mailbox data in batch mode.

Updated version of Kernel for Novell GroupWise to Exchange Migration software was launched today. A useful tool for email migration from Novell GroupWise to Exchange is now available with new features where administrators can easily migrate the archived user mailbox items supported with advanced options to perform efficient migration. Creating an XLS database file for the batch migration of user mailboxes is a user friendly feature added to the latest version of the software.

A boon for administrators who can migrate UNLIMITED user mailboxes at once without any stoppages in the migration process.