What is Public EDB (Pub1.edb) Mailboxes?

Microsoft Exchange Server is the powerful email server technology which integrates agile Extensible Storage Engine (ESE) and security-enhanced Information store to facilitate seamless email communication. While coursing through the intrinsic database of Exchange Server, one will find that the information store is actually comprises of .stm and .edb files.

Moreover, Exchange Server identifies the default mailbox storage database as Priv1.edb and Priv1.stm files. While on the other hand, Pub1.edb and Pub1.stm stores all the email information associated with the default public store. When you talk about the .edb file entity, then you must understand that it is an ESE database storing crucial email attachments and MAPI messages.

Exchange Admins have experienced a varied range of situations where Exchange Server is unable to perform the standard shutdown procedures. The reason might be attributed to:

As there are many reasons of dirty shutdown state propagation, one must also understand the intricacies involved at the deepest Exchange database level. When any of the mentioned reasons arises, the Exchange Server database is unable to isolate itself from transaction log streams which impacts the consistency and integrity of database. At this instance, if you restart the Exchange Server services, then the server looks out for missing log files of data, which if went missing; creates Exchange corruption situation.

In both the scenarios the fate of Public and Private EDB mailboxes is always compromised; corruption at the lowest level of Exchange database always has a ripple effects as we move deeper into the Exchange information store. In addition, the possibility of Pub1.edb corruption can't be denied in such instances which needs proactive and smart troubleshooting tactics to restore all email items.

Fixing the Pub1.edb files mean entire recovery of Exchange information store using the command line prompt. Interaction with the intrinsic functionalities of Extensible Storage Engine and information store can be easily facilitated by the disaster recovery commands. Let us see how we can regenerate the damaged or corrupted Pub1.edb file.

When the most critical dirty shutdown states and jet engine errors have reached and affected your Exchange database, then you wouldn't have to be surprised if you couldn't recover important email items even after executing the hard and soft recovery process. Hence, during such instances, one must arrange a trustworthy third-party Exchange Server recovery solution to repair all .edb files including Public as well as Private one. 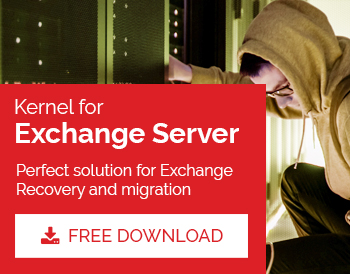 Kernel for OST to PST