Microsoft 365 Groups and Teams – A Comparison

“For providing collaboration facilities to a group of users, Microsoft 365 has a Group feature integrated with it. A recently introduced feature named Team in Microsoft 365 does a similar function with many differences. Let us have a discussion on it.”

Often individuals working in the same organization have to collaborate together on projects. Each member has smaller specific tasks to perform. But it requires a regular and uninterrupted flow of communication with the entire team. To make the work smooth, Office 365 has 2 utilities- Microsoft Groups and Microsoft Teams. Both have their fair share of pros and cons and here we indulge in a comparison between the two.

What are Microsoft 365 Groups?

A group in Microsoft 365 is an object in Azure Active Directory which lets a set of individuals to collaborate and access resources which have been added in OneNote, SharePoint Site, Planner, Teams, Calendar, Yammer etc.

An admin can create a Group and add members to it to let them access all its relatable resources. There is no need for assigning permissions manually as it is automatically assigned to all the added members. The Group can be private or public and can be created from different applications like Teams, SharePoint, Planner, Outlook, Outlook on the web, etc. It works with all these Office 365 applications, ensuring collaboration, communication, and data sharing between different platforms. Also, it allows shared access to a collection of resources. Here is the Microsoft representation of Office 365 Groups. 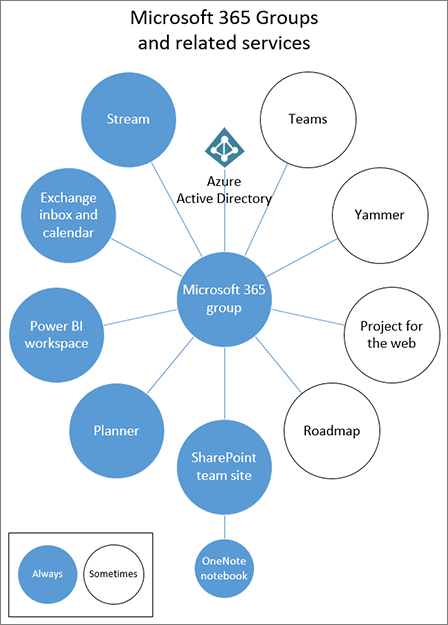 What is Microsoft Teams?

Teams is one of the most popular Microsoft 365 applications which allows its members collaborate and communicate with each other through have video chats, chats, document sharing, file sharing, voice calls, meetings, and many other services. Teams offers many services including those services which are offered in Microsoft 365 Groups. Team is meant for secure internal communication based on chat and video calls. When a Team is created, an Office 365 Group and SharePoint document library are also created. Alternately, administrators can create Team for an existing Group.

Groups and Teams – How are They Connected?

Microsoft 365 Groups and Microsoft Teams are complementary with each other. Whenever a Team is formed, a private Group also gets created automatically. All the files, documents, and data get saved within the SharePoint site for them. Also, there is a provision to add a Team site to an available Group. While working on Teams, users experience the benefits of a Group as well. When you create a Channel, you get a dedicated folder in the SharePoint document library for it. So, one can see that Teams are dependent on other services.

Group and Team – How do they differ?

A Microsoft 365 Group differs from a Microsoft Team in many ways. Some of them are listed here:

It can be concluded that there is no competition between Microsoft 365 Groups and Microsoft Teams, and both go hand-in-hand. Groups allows Azure Active Directory users to collaborate and share files, while Microsoft Teams helps in organizing these files and communicating with others in different ways. Teams can be connected to Groups easily using Microsoft 365 interface options. For Group users, facilities like File Storage by SharePoint, Planner, OneNote, Exchange mailbox, etc. are also available.

In addition, you should also be aware about the limitations which come along when a Team is connected with an existing group-

To sum it up, these are the differentiating factors between the two platforms-

Microsoft Groups and Teams provide collaboration facilities for colleagues. They are complementary applications that work together to give an enhanced collaboration and sharing experience to all the Office 365 users. Both help in improving productivity in the organization. To keep all the relevant data of these platforms secure, you can also consider performing a backup with the help of Kernel Office 365 Backup and Restore software. Hope you got some idea about Microsoft 365 Groups and Microsoft Teams through this article!