Why & When to Use VHDX or VHD files with Hyper-V

With the release of Windows Server 2012, Microsoft introduced various virtualization improvements. Among these improvements, one important improvement was the addition of the VHDX file format. It is very important to note that Windows Server 2012 supports the new format, and at the same time allows Hyper-V administrators to make the proper usage of the old VHD format. However, the key question still remains –

“When to Use VHDX or VHD files with Hyper-V?”

So, let us try to understand this more with a comparison between both formats, i.e VHD vs. VHDX.

How VHD and VHDX differ?

If we try to make a comparison between VHD and VHDX files, these are the major differences:

Now that you know the main differences between VHD and VHDX files, you can choose the file format accordingly. For some reasons based on the versions support,

Upgrade of VHD files to VHDX

An individual must keep in mind that this new VHDX format cannot be used with Microsoft Server 2008/2008R2 and therefore in case you are preparing to place your virtual machine on a Microsoft Server 2008/2008R2, Hyper-V then make sure you keep your files in a VHD format. And Windows Server 2012 users are recommended to upgrade VHD files to VHDX in order to make the upmost utilization of the benefits the new format. One can convert VHD to VHDX format from Hyper – V Manager (Windows Server 2012) User Interface using the Edit Virtual Hard Disk Wizard (Actions > Edit Disk). You can take help of the PowerShell also to convert VHD file format into VHDX file format.

So, we get that VHDX files are to be used with Windows Operating System 8 version & above and Windows Server 2012 & higher versions. While for the older versions, use of VHD files is suggested as VHDX files are not supported on these versions.

Like other file formats, there are chances of corruption or data loss in VHD/VHDX files owing to many different reasons like hardware failure, sudden shutdown of system or power outage, antivirus programs intrusions, etc. If you are already using the VHD or VHDX file and is facing corruption and subsequent data loss, then you can directly go for the advanced Kernel for VHD Recovery software without thinking twice. It completely scans the virtual hard disk drive and recovers desired data including the deleted partitions. It displays the recovered data first before saving it to the desired destination location on the system drive. The repair tool successfully repairs all VHD and VHDX files from any server version. You can work on this tool by downloading its trial version from the website. So, whether you choose working with VHD or VHDX file format, remember that its data is always secure with this tool. 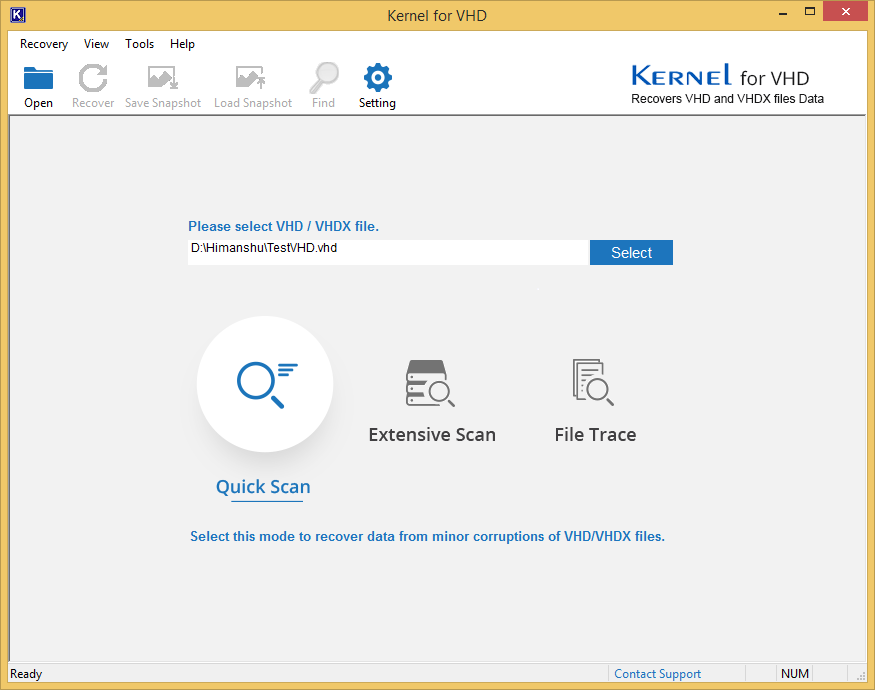 Conclusion
The blog explains the main differences between virtual hard disk files – VHD and VHDX – to let users choose their format conveniently. It also mentioned the methods for the conversion of VHD to VHDX file format. To recover lost or deleted VHD/VHDX files due to corruption, an effective third-party utility is described as well.