Megha Sharma Updated On - 24 Oct 2019
“To answer one of the queries related to Autodiscover feature raised by a user after on-premises Exchange to Office 365 migration – this blog is drafted for all those users who are in the same situation.”

Why need to disable Autodiscover after Office 365 migration?

User must remove this setting of Autodiscover (internal AutodiscoverVirtualDirectory) with the old Exchange Server to cope up with this issue. Let us learn that in the next section.

For security reasons, you should backup the ISS configuration first with the following steps.
On your old Exchange system, run the Command Prompt as administrator by right-clicking on the application exe and selecting Run as administrator option. Then run this command:

The backup of the ISS configuration will be taken. Next, search for the Exchange Management Shell, right-click on it and select Run as administrator option. Let it connect with the Exchange Server. Now run this command to get the information about the current Autodiscover virtual directory.

Type “Y” and press Enter, when asks for confirmation. The directory will get removed after this.

It will result in no output, which shows that the Autodiscover virtual directory is removed.
To confirm that Autodiscover now points to Office 365, you can run this test. 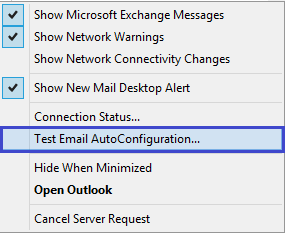 If the results are associated with your configured Office 365 server, then the test is successful.

As you have seen, there comes many issues and hardships while performing Exchange migrations manually. So, we suggest you always take the help of third-party Exchange Migration tool to perform the automated migration. Kernel Migrator for Exchange performs swift migrations between on-premises Exchange and Office 365 without any drawbacks. It can migrate data from on-premises Exchange to Office 365 along with archived mailboxes, shared mailboxes, and public folders. This advanced tool includes extra amenities for migrating Outlook rules, folder permissions, etc. Also, it performs pre-migration analysis, agent configuration, and much more. So, use this tool without any hesitance for performing all kind of advanced Exchange as well as Office 365 migrations.