Office 365 is every professional’s ideal management applications suite due to the countless utilities it offers. However, some of its features might cause a few troubles. One such is the Reply All which is an effective feature but has also created nuisance for many companies and their employees with the creation of Reply All Email Storms. This leads to a heavy damage in the commotion of work for organizations especially those who do not have proper mail distribution lists.

After many years, Microsoft attempted to target this problem and eliminate it completely by rolling out Reply All Storm Protection. Although this is still under improvement but does involve some intricate details. In this article we are going to dig deeper into all the various aspects of Microsoft rolling out the new Email Storm Protection feature in Office 365.

What is Reply All Storm and its protection feature?

When there is a sudden rise of ‘Reply All’ emails on the distribution lists, it creates a long chain of messages. This further multiplies the load of traffic, resulting in an overwhelming email server. This entire situation is the Reply All email storm, also known as Reply Apocalypse.

To protect a workspace from such a disaster, the Reply All Storm Protection feature will first detect it and then accordingly block the Reply-All messages which are coming in the same email thread and apply the settings which have been set in the first place.

There were some incidents which formed the basis for the need of such a feature. It all started when a Microsoft developer was working on creating a new tool in 1997. He created multiple distribution lists and divided all the employees into them. Each list had about 13,000 employees and named it Bedlam DL3. One day an employee found this list and mailed to remove them from it. Now, this email was received by all the 13,000 members and some of them even sent replies. This created a long chain and each employee’s mailbox was flooded with thousands of emails. Around 15 million emails were sent in an hour, and this led to a crisis which took about 2 days to restore the mailboxes. Many such incidents have followed with companies like Capgemini, GitHub, Utah state government etc.

With this heavy load of incoming messages, the email servers receive much more traffic than usual and get crashed. This could take a few days to recover them. The organization’s productivity goes for a toss in such a situation.

To expand the scope of this feature so that more users can take maximum advantage, Microsoft has enabled email admins to customize these settings to make it more specific to their own organization.

If a likely email storm is detected, the protection feature will send a Non-delivery Receipt (NDR) to the sender to immediately stop it from escalating further. 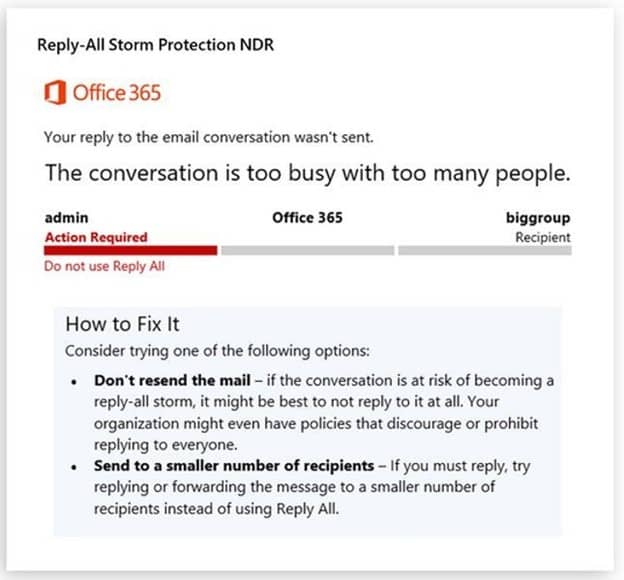 At the time of the introduction of Reply All Storm Protection feature in 2019, it was a basic utility with all pre-decided settings. It wasn’t available for any kind of modifications. After receiving tons of customer feedbacks, Microsoft wanted to be inclusive towards more customers and that’s when it made some massive changes in 2021. Apart from the detection time, all the other aspects of the storm protection utility can be modified by email admins to make them appropriate for their organization.

In future, they do have plans to expand the scope of this feature. It will get updates which will focus on introducing reports, insights, and notification options. In addition, there is a possible to make changes of these settings through the Exchange Admin Center itself.

When email storms are at their peak, it gets impossible to find the relevant emails. To easily tackle this, experts suggest taking timely backup of your data. This keeps it secure and makes dealing with such adverse situation much simpler and worry free.

To backup all the data accurately, Kernel Export Office 365 to PST software can be utilized to save all the mailbox items in your preferred output format by following some quick steps. It is a completely secure process due to the advanced algorithms followed by the tool. 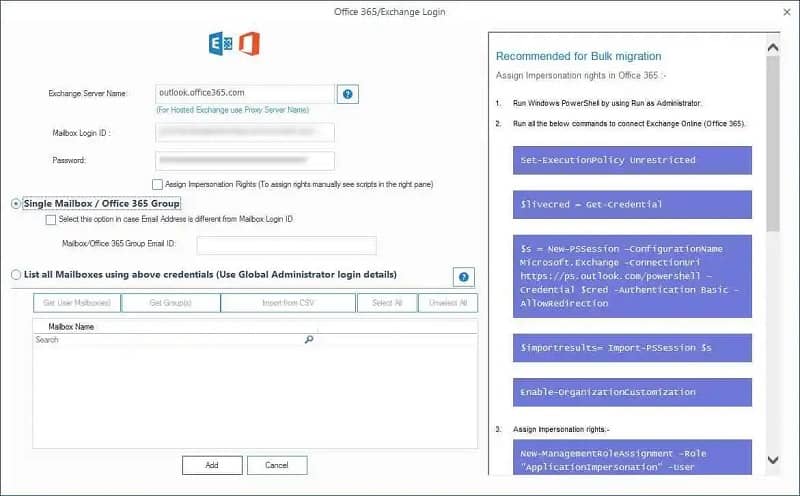 Reply All email storm has put the data of many companies at risk. It has a much bigger impact than anticipated. That’s why Microsoft introduced its Protection feature to save us from all the trouble. In its latest update, the settings can now be modified by the email admins. This is a huge advantage for all, since it is more inclusive for smaller sized companies. More updates are on the way which are based on telemetry and customer feedback. To keep your data safe from any such issue, you can rely on a professional software to take backup which also has been recommended above.