Kernel for
OLM to PST

Convert OLM to PST to access Outlook for Mac emails, contacts, & calendar in Windows Outlook. It helps you retrive corrupt or inaccessible OLM files with all metadata/properties. Both Mac and Windows experts recommend this tool for Outlok for Mac to Outlook migration.

Why you need itOLM to PST converter ? 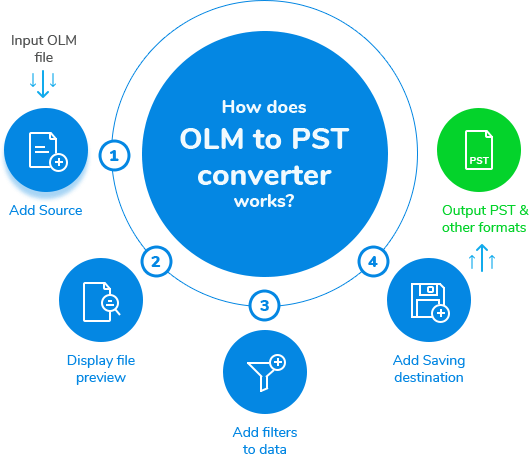 Data migration! Oh my God! It is the most important, most critical, yet the most tiresome process. You have to put all your focus and concentration on the ongoing task. But, with this tool, you just don’t need to worry about all this fuss. This is a completely fuss-free process.”

Just a few days back, I have tried this OLM to PST tool in order to convert my MAC emails from Outlook 2011 OLM file to PST file format. It makes me really glad to say that the product is 100% authentic and it really works. Very user-friendly and met all my expectations."

Data migration to MS Outlook from Outlook Mac was never so easy. But, Kernel for OLM to PST did it very easily. What I liked most about the software is its user-friendly interface and useful features. I could use it by myself without any assistance. Full marks for the GUI."

My Outlook for Mac OLM files got corrupted, and I knew I would have to perform OLM to PST conversion to overcome the situation but was not sure how to conduct the operation. I tried this tool, and guess what? It took me just a few minutes to achieve the desired result."

Brief description of all the integrated features and functions of the OLM to PST converter tool.

Easy way to convert OLM to PST The software accurately converts OLM files to PST and makes Outlook for Mac emails accessible in MS Outlook. The conversion is fast and completes in three simple steps. So, you just need to add the OLM files, go through the preview, and then save it to PST file.

Complete conversion without loss The software is capable of repairing corrupt or damaged OLM files. It recovers all mailbox items such as emails, contacts, attachments, calendars, notes, tasks, etc. without affecting data integrity. Even deleted items can be recovered using this OLM to PST converter.

Migrate OLM to Apple Mail MBOX This OLM to PST conversion tool helps you in exporting your OLM files to MBOX. So, you can access Outlook for Mac emails in Apple Mail, Thunderbird, Spice bird, Eudora, The Bat, WebMail, etc. irrespective of their versions.

Find Option to Save Required Emails The 'Find' option of the software helps the user to search for specific emails based upon different criteria i.e. From, To, Subject, Received before/after (date), and Attachment. This option is quite useful when the user needs to find some specific items quickly.

Preview Mailboxes before Conversion Kernel OLM to PST Converter is designed with advanced algorithms that allow you to preview the OLM file data so that you can select the specific data, and then convert it to PST.

Split PST File If the OLM file is too large, then you can convert it to multiple PST files with the help of the Split PST feature of the tool. This software allows you to split the PST file according to your requirements.

Kernel works for all these requirements

Step 1: Download, Install and Start Kernel for OLM to PST on your computer.

Step 2: Click Browse button to select simple OLM file or click + to add multiple OLM files that you want to migrate or convert.

Step 3: If you don’t know the location of the file, use Search option.

Step 4: Click Next and Preview the OLM file data before migration.

Step 5: If you are looking for specific email, then use Find Now button, it will instantly search for item along with attachment.

Step 6: Select the output file type as PST file and click Next.

Step 7: You can select the desired filters to save specific data items to PST file. Finally, save the PST file to a desired location and click Finish.

Home License –Buy this license for personal use

What customers say about

Good experience with the company

The company support is very good

Great support ,I did't go wrong with choosing this solution.

Kernel
for OST to PST

Kernel
for MBOX to PST

Kernel
for EML to PST