What Are The Reasons To Move HCL Notes To Office 365?

Lotus Notes which is now known as HCL Notes is one of the earliest email managers which grabbed the attention of professional organizations. It uses Domino as its Server and can run on any environment (Windows, class MAC OS, Linux, Unix, etc.). IBM claims to have sold more than 145 million licenses till date, but multiple times various experts have criticized the performance of HCL Notes. One major drawback which gets the maximum criticism is a non-user-friendly interface. Users find it hard to search the saved files. Attachment handling is also not good. Many simple traits which were available in other email managers came quite late in HCL Notes, like drag-&-drop folders and follow-up flags.

Reasons to Move from HCL Notes To Office 365

After getting to know about the disadvantages about HCL Notes, it is quite natural that user wants to move from HCL Notes to other platforms and Office 365 is the most prominent destination.

So, choose wisely the mode of migration for your Notes data to the cloud destination and our suggestion would always be the trusted automated solution. To migrate your Lotus Notes or Domino Server data to Office 365, there is a special tool named Kernel Office 365 Migrator for HCL Notes. You can easily migrate NSF and Domino server files to Office365 mailboxes using this software. HCL Notes to office 365 migration utility is a reliable and high-performance software which lets you migrate Domino server, Smart Cloud Notes, HCL Verse, and NSF files to the cloud and access them with any web browser from anywhere. It supports all Notes versions and moves its data to Office 365 Archive mailbox, Public Folders, Mailbox, etc. conveniently. Users can move Notes groups as well to the cloud. The tool integrates advanced filters to move selective data and offers the preview option for local NSF files. A free trial version can be downloaded from the website for testing and analysis purposes.

HCL Notes was quite popular some years ago. But since the advent of cloud computing, it has continuously lost its user base. Now Office 365 is providing all benefits, features, and security that HCL Notes was never providing. So, a smart and advanced Notes to Office 365 migrator tool is suggested in the blog.

Video Tutorial to Move Data from HCL Notes to Office 365: 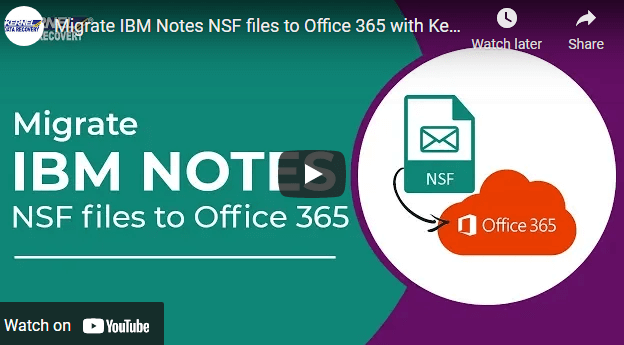